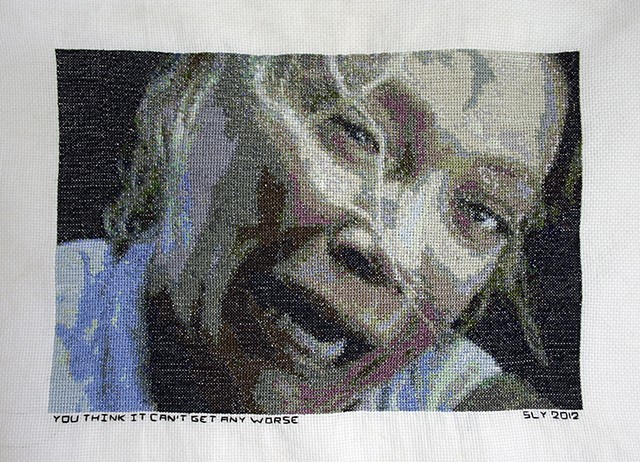 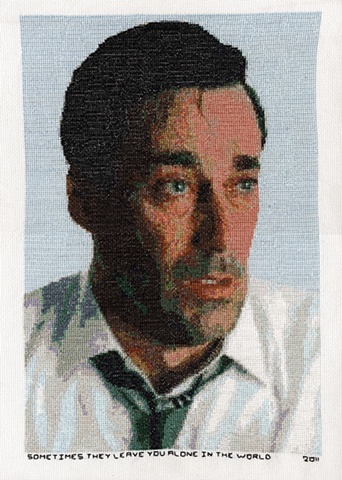 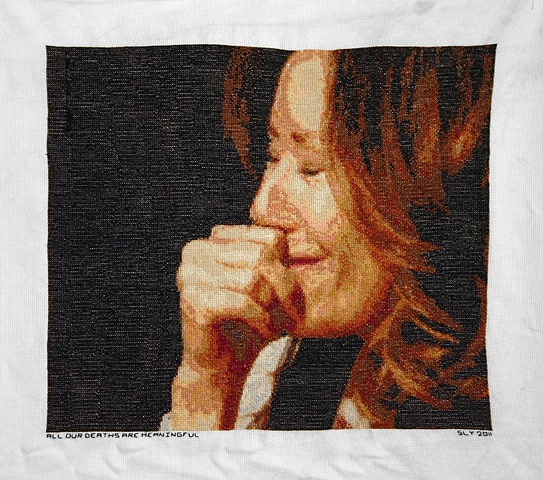 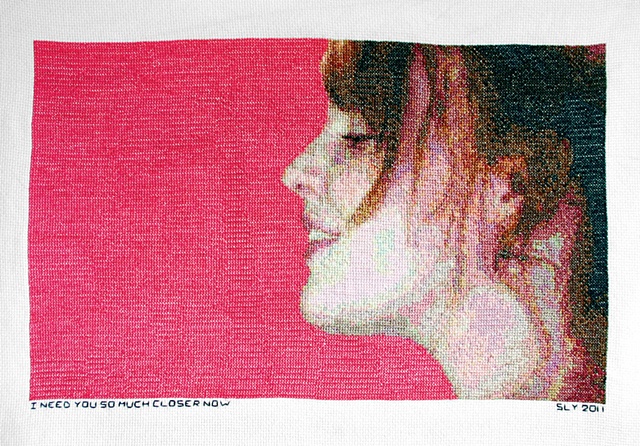 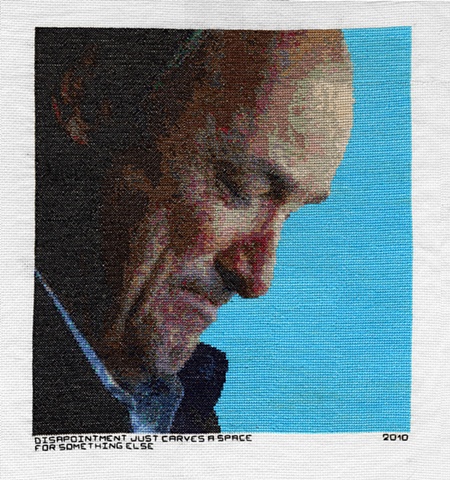 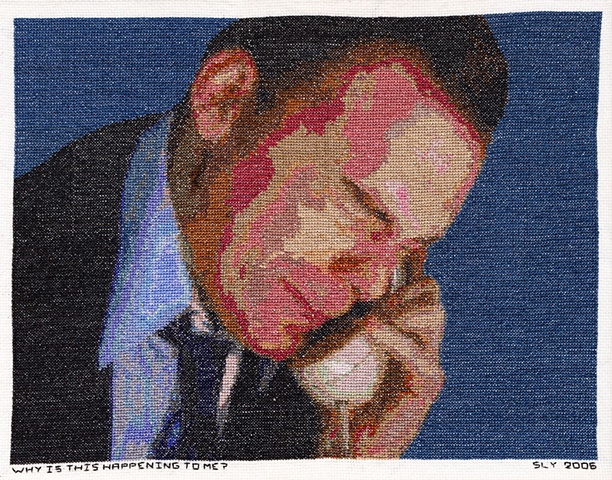 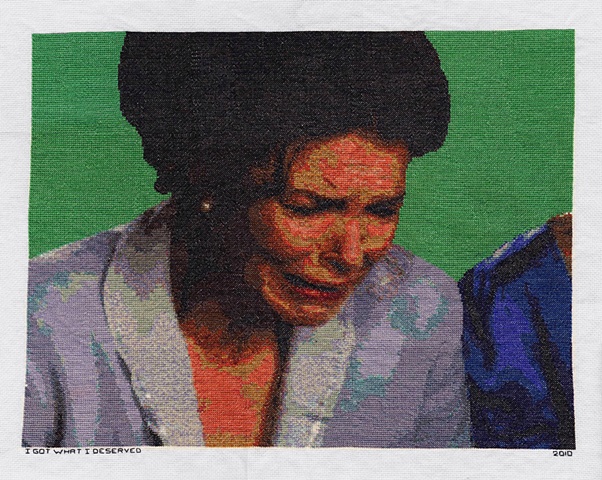 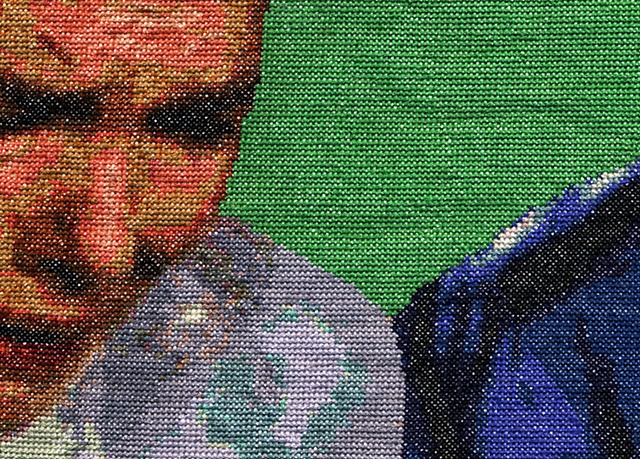 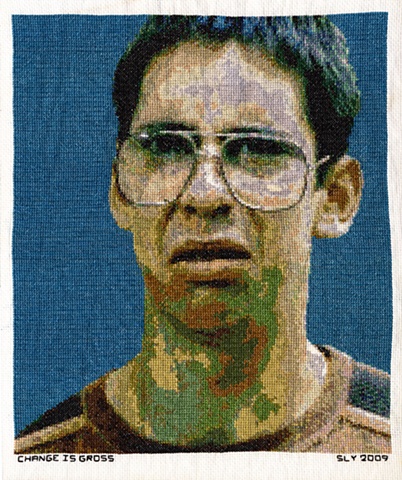 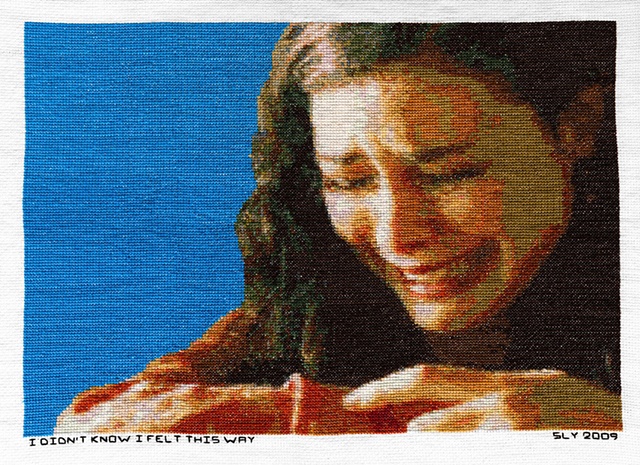 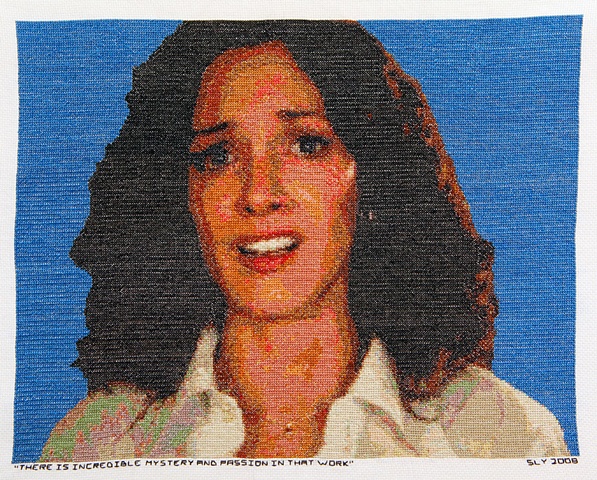 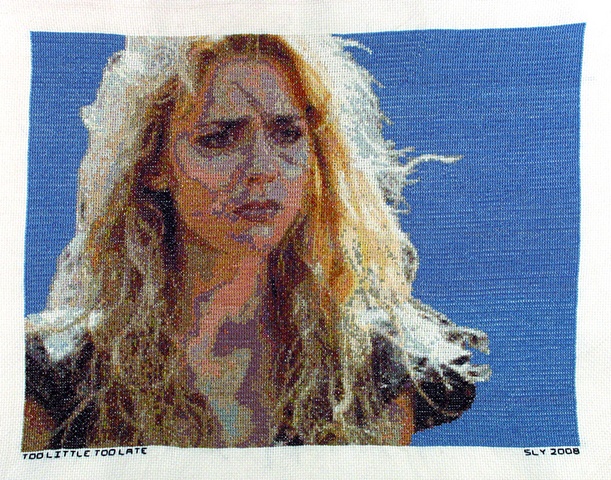 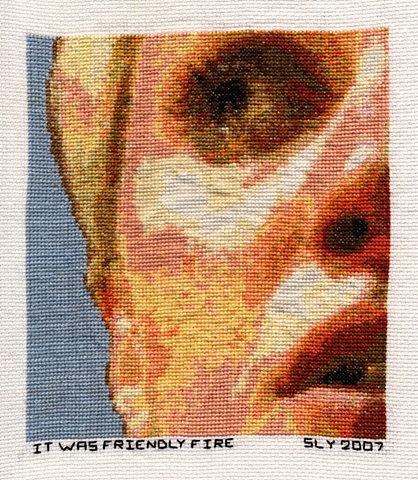 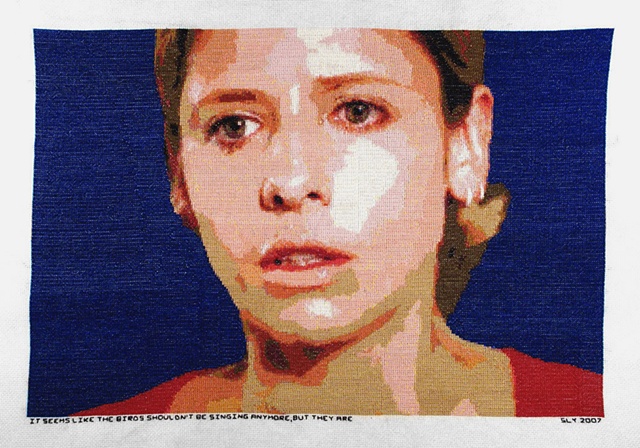 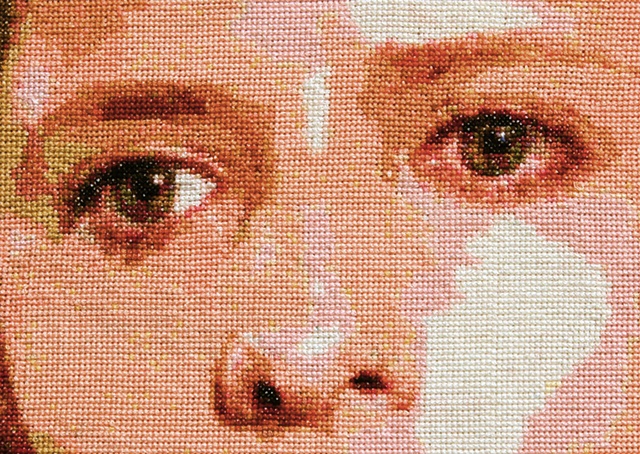 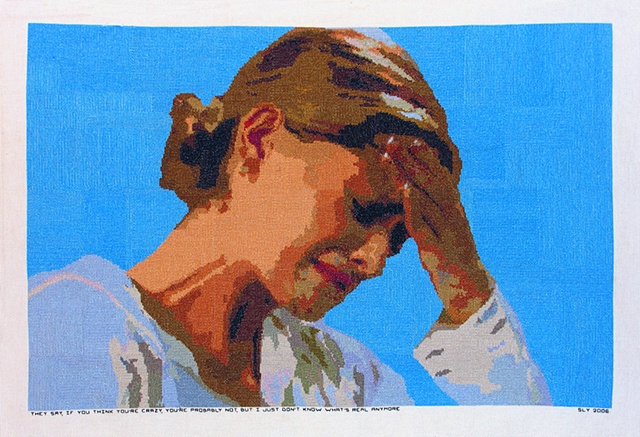 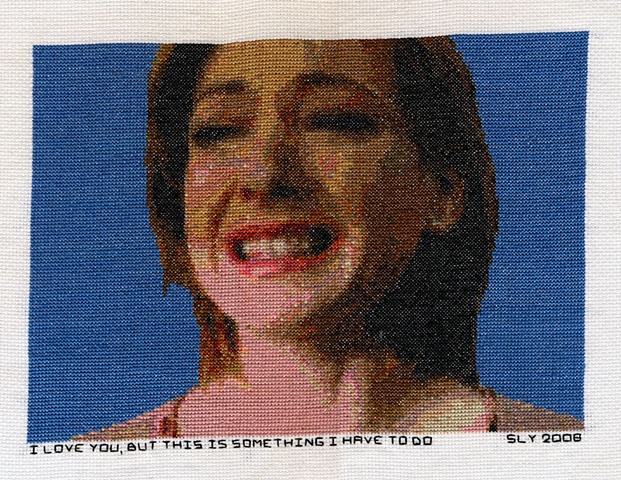 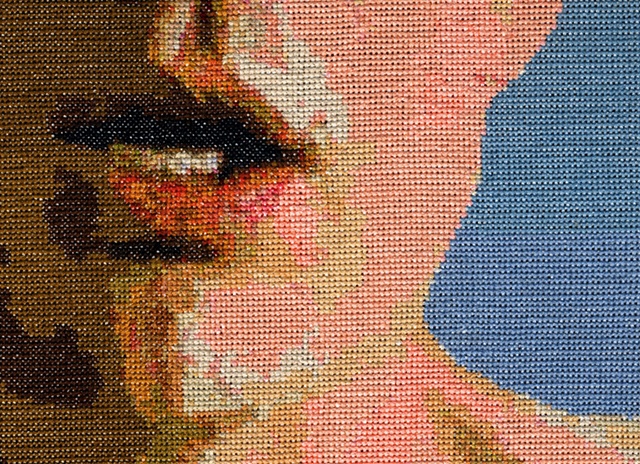 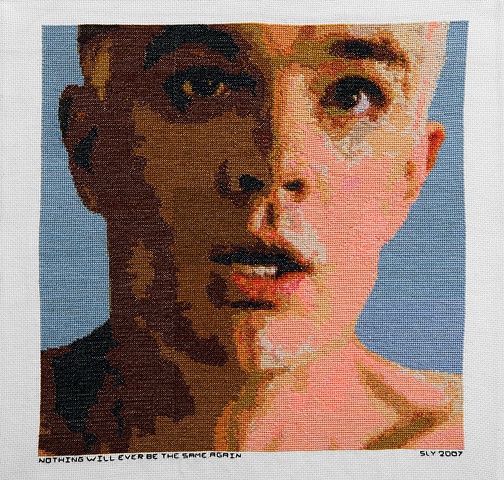 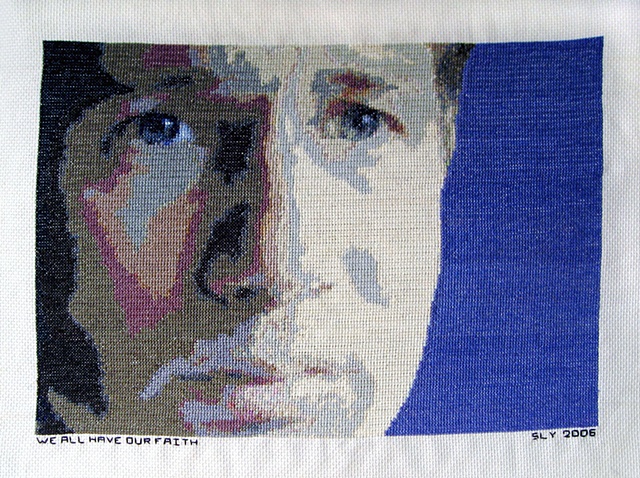 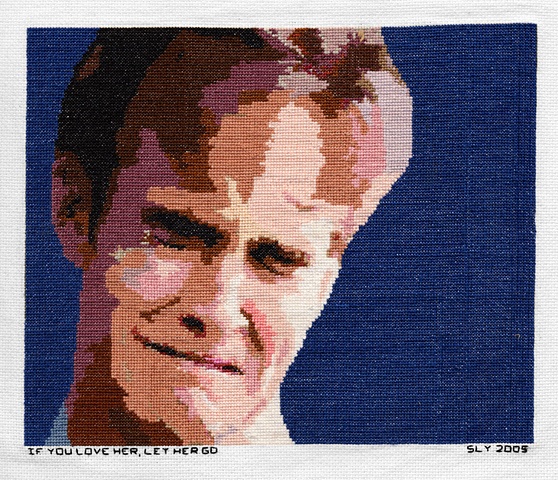 Everybody Hurts (2004 - 2012) While watching television characters experience the cruelties of their lives, the tears we cry are as much for ourselves as for these fictional characters. Humans have told and heard stories throughout history. TV shows are contemporary myths, which help us to define who we are, individually and in relation to our culture. Emotions mediated through stories are not “unreal” emotions. They are conduits to those who tell the stories and to others who experience them. Feeling this sense of connection in what is often a solitary action is an example of the transformative power of art.

The embroideries in the series are reproductions of television screen-captures. The experiences of sadness, guilt, terror and hopelessness are frozen on the faces of fictional characters, opening them up to a voyeuristic inspection of pain. The act of cross-stitching further cements these endless moments of torment for our viewing pleasure/discomfort. To slowly reproduce a single moment from a time-based medium by hand is an act of contemplation and commemoration.

Each stitch is a badge of endurance: of the glacial process of art-making and of the pain shown in the image. Each stitch challenges me to keep going and distracts me from the overwhelming whole. Each stitch symbolizes the arduous task of continuing to exist from second to second, in the face of the supreme dread that is registered on the faces of Buffy, Mulder, Spike and others. The process of embroidery, like that of existing, goes on and on. Every moment, or stitch, requires a choice, a commitment to the difficult task of continuing on.

Work from this project is contained in MP3: Volume II, the second installment of the Midwest Photographers Publication Project.